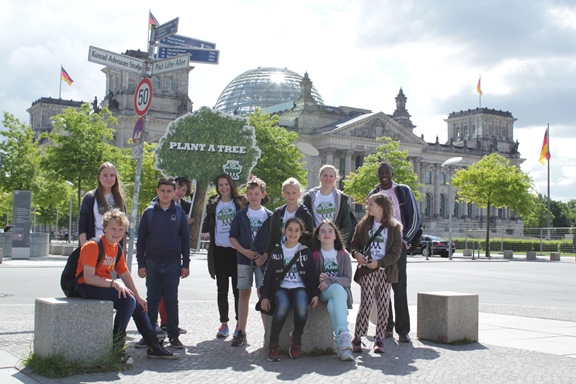 Handing over the Manifesto of the Youth

Immediately after the Youth Summit 2015 came to an end, the  four participants Lena, Rebecca and Tamino from Germany and David from Kenya, travelled to Berlin to hand over the freshly finished Manifesto to as many ambassadors of as many countries as possible right the next day (with the support of Carolin and Marieke from the Plant-for-the-Planet secretariat).

Even though we contacted all Embassies the week before the Youth Summit to tell them we would be coming by and would be pleased to meet the ambassadors in person, only a very few replied. However, this did not stop the group from trying to visit the embassies anyways. The German Chancellor, Angela Merkel, did not reply to our mail. Still, on Tuesday morning the group started in front of the Kanzleramt (official residency of the German head of state) where they were accompanied by 10 climate justice ambassadors from Berlin. We weren’t allowed into the Kanzleramt,  so Rebecca was handing over the envelope with the manifesto together with a bar of CHANGE CHOCOLATE  to the security guards by the entrance. Rightly after, the group continued to the Swiss embassy, where they were expected by Lilach Guitar, first secretary to the ambassador. She was very happy to receive the letter and promised to hand it over to the ambassador right away.

From there on, the Berlin group of climate justice ambassadors continued to different route of embassies in the south of Berlin. They had a meeting with the ambassador of Iraq, where they were even given a tour of the embassies and greeted with little gifts. Afterwards they also went to the embassy of Ethiopia, Serbia and Afghanistan. Lena, Rebecca, Tamino and David continued towards the Brandenburger Tor where the embassy of the USA is located. Though David and Carolin managed to talk to someone from the environment department he was not allowed to receive the letter. Carolin tried to contact another employee from the embassy to arrange a meeting later that day but unfortunately it wasn’t possible. However, the second Ambassador from the Netherlands, Mr. Frank Mollen, was happy to receive us so we continued to the Dutch embassy and the group handed over the manifesto in person. Mr. Mollen was very interested in the outcome of the Youth Summit as the Netherlands are heavily impacted by the raising of sea level. He promised to forward the manifesto right to his president. After this successful meeting we continued right away to the UK embassy where we were welcomed by Sue Townend, the embassies secretary for environment,  who even prepared a little speech for the group. With this encouragement the group went right to the French embassy. However, there we were not able to meet anyone in person. The same happened at the Russian embassy, which was closed at this day. It didn’t stop us from taking a picture though.

After this eventful morning we split up on two groups, Lena and Rebecca taking over embassies of Thaipeh, Peru, Chile, Brunei, New Zealand, Australia, Angola and Brazil. Tamino, David together with Carolin and Marieke went on to the Canadian Embassy, where we had to deliver the letter to the embassies own mail reception. The employee there managed to get Mr. Benjamin McLean, Deputy Head, Public Affairs and Head, Education & Social Media,  down so after the letter and the chocolate were scanned and proven to be safe, David handed them over personally to Mr. McLean. On the way to the Indian embassy, we had a stop at the former inner German border, pieces of the Berlin wall, a symbol for change and that the people can overcome any kind of challenge, also the climate crisis, if everybody is working together.

The group was highly motivated, only to find that the Indian embassy was closed and it wasn’t possible to leave the envelope there. We continued to the embassy of Japan where we were expected but not allowed to photograph the delivery of the manifesto to one of the employee. The last stop of the day was the embassy of Spain where we were greeted by Rafael Chavez, first Consul.  We even got the chance to be shown around the official grounds inside the embassy. Day two started with a smaller but not less determined group. Tamino, David, Carolin and Marieke had an appointment with the Croatian embassy, where we were greeted with a juice by Petra Radić, second secretary to the ambassador. She listened to Tamino’s introduction and also promised to hand over the envelope to the ambassador right away.  Further, she was hoping that in 2016 there would also be climate justice ambassadors from Croatia taking part in the Summit. Afterwards we continued to the Kenyan embassy, where David was proud to hand over the manifesto to Rashid Ahmed Tulla, the first Counsellor of the ambassador. We continued our way to the Nordic embassies, where William Boe, Deputy Head of Mission at Danish Embassy, who was so kind to receive all letters for the respective ambassadors, Denmark, Sweden, Norway, Finland, and Iceland. Afterwards we had our second attempt at the South African embassy, which was more successful this time and we met with Horst Brammer, the second ambassador  to hand over the manifesto.  He was quite impressed with the achievements of the youth during the summit and warmly encouraged everyone to keep on fighting and stay active for our survival. The last stop of the day was at the embassy of Monaco, where we sat down with the ambassador Mr. Claude Joel Giordan. He was so curious about the results of the Youth Summit, that he opened the letter right away and after reading it, congratulated all of the participants on this achievement. The final act of the day was to send all remaining letters, which weren’t delivered by us in person via mail to the embassies.

And the first response to the manifesto has already reached us. See here: