Sunday, the 22th of October, 2017, 31 students from Oregon participated in the first Plant-for-the-Planet Academy in Tigard, Oregon! It took place at the Muslim Educational Trust (MET) in Tigard and was hosted and supported by MET. For this we especially thank Rania Ayoub, MET Director of Public Relations, and Wajdi Said, MET President and Co-Founder. And, for helping to inspire the timing of it, we owe thanks to Azia Celestino from Channel One Student News who wanted to bring our youth climate trainings, Plant-for-the-Planet’s Trillion Tree Campaign, and the federal climate case, Juliana et al. v. U.S. to Channel One’s 6 million viewers in schools across the country.

The Academy grew out the connections between Pam Vergun, Plant-for-the-Planet U.S.’s Acting Executive Director, and the MET community, in part due to the interfaith work of MET and P’nai Or Jewish Renewal Synagogue of Portland, of which Pam and her family are members. Both religious  organizations accomplish a great deal of good in the wider Portland community and so this was a natural partnership, with MET making it possible and P’nai Or lending its support.

Azia from Channel One had contacted Pam through the international office back in July about the possibility of covering an Academy and interviewing Felix Finkbeiner, the founder of Plant-for-the-Planet. Originally Channel One was considering covering the Tryon Life Academy, but settled on the one at MET. Pam also made possible a second segment filmed that day that was focused on the federal climate case with four Ambassador plaintiffs interviewed: Miko, Isaac, Hazel and newly-trained Ambassador Sahara.

Students and parents arrived at the beautiful buildings and grounds of the Muslim Educational Trust and were met by volunteers who took care of any missing registration information. They were greeted by the Ambassadors leading the Academy: Amelia, Mirabel, Miya, Lilly, and Isaac. Willa, Miko, and another Ambassador helped for part of the day. Pam introduced Plant-for-the-Planet, and the five Ambassadors gave the presentation. 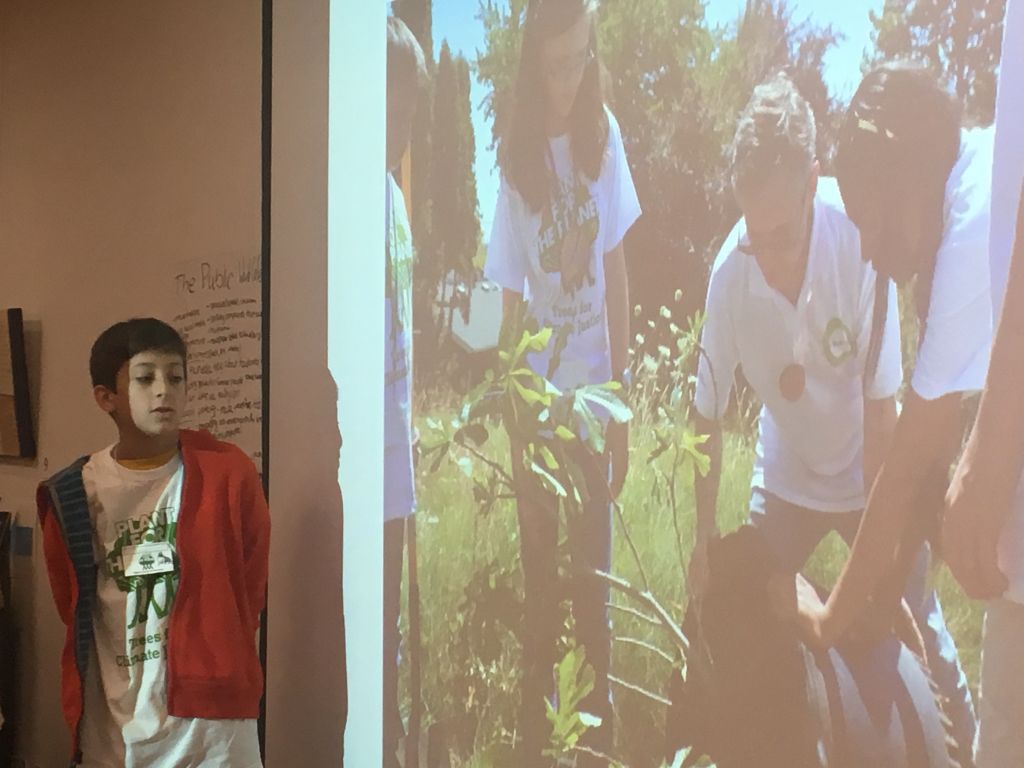 Then, we took a break and enjoyed delicious snacks.

We played the World Game. Then, we turned to Rhetoric Practice and discussed what makes a speech effective and gave out the slides with the presenters notes so students could practice giving small parts of the talk. Pam worked with the students to help each decide who would present which slides in the afternoon. We then went outside, onto the beautiful grounds of MET and with its graceful building behind us, worked together to plant the plum tree. Isaac led the planting. Amelia, under Azia’s direction, led everyone in introducing the gathering to the Channel One viewers, which was a lot of fun.

Afterwards, we came back inside and had a wonderful lunch of samosas, delicious rice, and other treats. We talked about the importance of taking only the food we know we can eat and making sure that nothing is wasted—that we can save leftovers and compost all that is left or can’t be eaten, and recycle all that can be recycled.

Then, Pam helped the students to practice the presentation for the afternoon slideshow in the library. As before, hearing that all who presented without notes would receive a chocolate bar from MET had a magical effect. Other students worked together on the World Café led by Ambassadors to brainstorm how to get others involved, under the direction of Isaac.

About 14 of the students presented, all keeping to their resolution to presenting without notes. The presentation was attended by the families of the students and the volunteers, as well as our VIP, Tim Swinehart, Co-editor of A People’s Curriculum for the Earth. Tim spoke about his work with the student-led drive that resulted in the first school district-wide ruling in the nation that the Climate Crisis must be integrated into the curricula and other decisions of Portland Public Schools.  Tim’s remarks followed the presentation and made clear how much of a difference students can make.

Students received their appointments as Climate Justice Ambassadors, along with certificates, Tree by Tree, Everything Would Be Alright, and flyers to let others their friends know about our youth climate training program. And, of course, we got some great photos and videos. We also read a letter written by U.S. Senator Ron Wyden expressing his appreciation that “…young leaders like you are showing your community and nation your vision for a low-carbon future and what it will take to get there…. Your commitment to climate education, advocacy and stewardship is another example of Oregonians coming together when we need it most.”

Immediately following a final photo together, the four Ambassadors and federal plaintiffs joined Azia and Demetrius in MET’s library for an interview discussing the federal climate case.

This was followed by a bit of basketball in MET's gym for the remaining youth climate leaders, old and new.

We would like to thank all those involved in this wonderful Academy. I think the Ambassadors and their families appreciated the work that Pam, Rania, and many others had put into the Academy. Everyone agreed that Isaac, Miya, Amelia, Mirabel, and Lily did an awesome job leading the Academy, and that Bill’s parent meeting was excellent. Special thanks to Rania, Tim, and to the generous support of other community volunteers who volunteered at the Academy and in other ways. In addition, thanks to Jajgit Nagra Field Representative, who assisted U.S. Senator Jeff Merkely with sending a letter in support of our youth, and to Ree Armitage, Field Representative, who arranged for the letter from U.S. Senator Ron Wyden.

We deeply appreciate the kind donation by the Muslim Educational Trust for giving us the use of their beautiful building and grounds for this Academy and for their support of the segments filmed for Channel One News. And, for the Channel One team working to increase awareness of the Crisis with their powerful segments and amazing network. Thank you also to Rob Vergun for all he did behind the scenes.

Rania acted as the local organizer and took arranging many of the details, coming through with grace even when an important detail got lost in the months since we first began to plan to work together. She did an awesome job with publicity for the training, made sure we had delicious snacks for the morning, chocolate bars to help students present without notes, and the most delicious food from countries connected to MET—possibly the best food ever at a U.S. youth climate training!

You can find more pictures of the Academy here.

You want to become a Climate Justice Ambassador? Then register here for an Academy in your region.