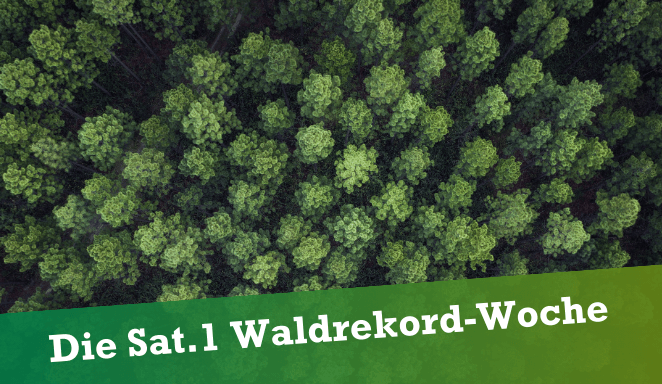 SAT.1, the german free-to-air television channel is dedicating its program to campaigning on topics of environment, sustainability and reforestation starting March 15 to 19 to plant record number of trees. Comedian Luke Mockridge accompanies the event with two prime-time shows in the television. The program stats off on Monday the 15th at 8:15 p.m. with the show “LUKE! The environment and me “.

“The time in which only scientists can do something for the climate and our world is over. I’m not a biologist, of course, but I used to take bio in school, so I know that trees can capture CO2. The more trees there are on the planet, the more time we have to face our problems here on earth. And to make the world a better place together with SAT.1 and the viewers, what can you have agianst it?”

Other program highlights include a celebrity self-experiment for more sustainability in everyday life, a documentary about the German forest with Steven Gätjen and Janine Steeger, a green extra challenge for the judges on “Das große Promibacken” and lots of tips and information on environmental protection. Felix will also be on board: as Steven Gätjen’s interview partner in the documentary “Operation Wald” on Thursday, March 15, 11:00 p.m., as well as on March 18, and 19 in the shows by and with Luke Mockridge.

The “SAT.1 Waldrekord-Woche” is accompanied by a fundraising campaign: For every euro donated, we at Plant-for-the Planet, as a campaign partner, will plant a tree in our planting project on the Yucatán Peninsula in Mexico in the fight against the climate crisis. As early as March 1, viewers can participate in the fundraising campaign at www.waldrekord.de. Plant with us and enjoy the show!