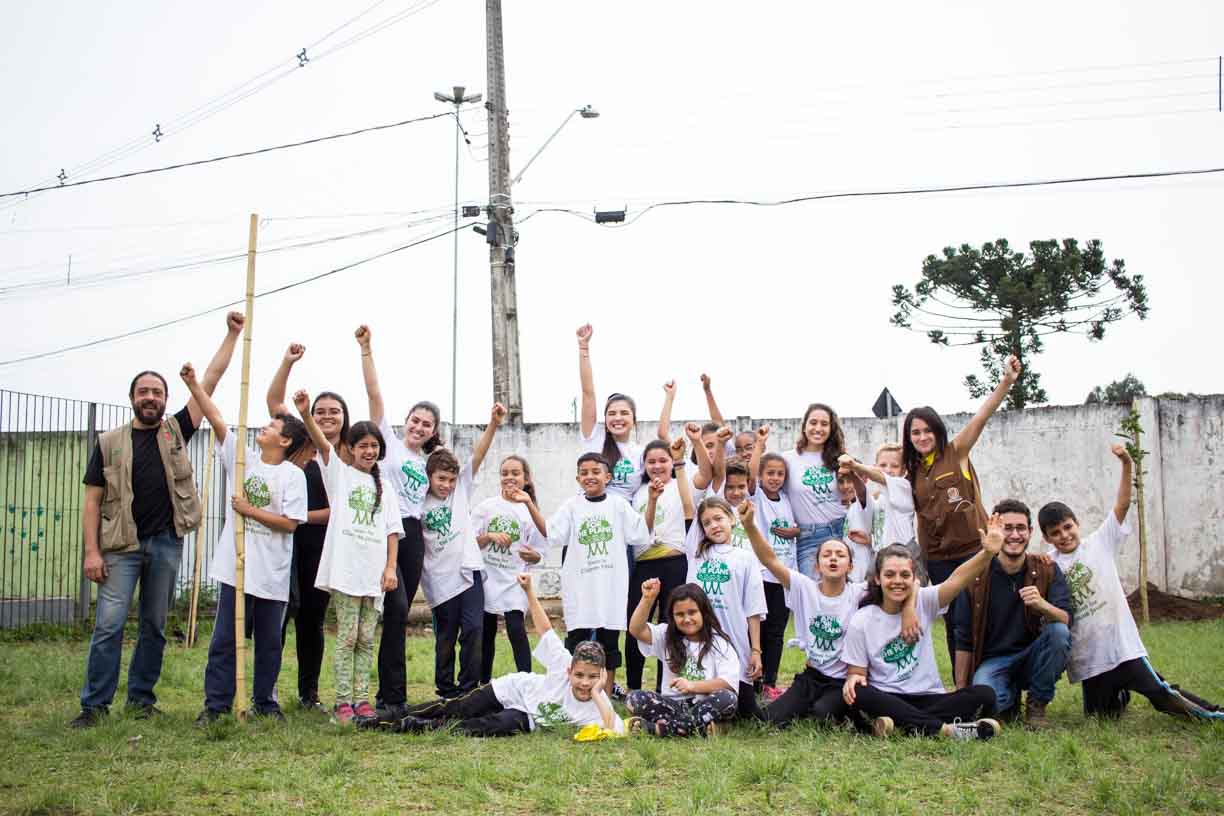 The Academy in Curitiba took place on May 6, 2019. 28 children from the Escola Municipal Senador Enéas Faria were keenly waiting for the academy to start. The event was free-of-charge for all the attending children, aged from 10 to 12. The Academy began with some welcoming words of the organizers. Then the full attention of the children turned to the presentation “Now we children save the world!” given by Climate Justice Ambassadors Làzaro and Ana Clara. Complex topics, such as sources of CO2, global warming, photosynthesis, the climate crisis and global justice were presented in a suitable way for children – and nobody could be better for that task than children of the same age as Làzaro and Ana Clara. After the presentation, the participants had the chance to clarify their questions. During the icebreaker game “repeat the name”, the children had the chance to get to know each other. For the following part, the children were divided into small groups, to learn about global distribution and global justice in the so-called “World Game”. The children distributed tokens, sweets and balloons among the continents displayed on the world map. The three playing figures symbolize the world’s population, wealth and CO2 emissions respectively. After seeing the real-life distribution of these resources, all children agreed that the distribution was unjust. Although only 5 per cent of the population lives in North America, they possess almost 30 per cent of the world income and emit 20 per cent of CO2 emissions. Therefore the children redistributed the sweets and balloons, in order to visualize how a fair distribution would look like and to keep in mind that everyone should have equal rights. In order to take action and speak up for their future, the children need good presentation and speaking skills. Therefore the participants prepared and presented short passages from the opening presentation they had listened to in the morning in rhetorical training. They gave each other feedback on how to improve their presentations in the future.

After the lunch break, a small group practised the final presentation for the evening event and the rest of the children started the World Café. During this activity, the participants were collecting ideas to the questions on how to get the attention of the media, how to motivate adults, friends and classmates and how to organize a planting party. Afterwards, the children gathered in their school groups and planned their own project, which they would want to implement after the Academy. At the end of the day, the children proudly presented the prepared presentation and their ideas from the World Café to the principal and the pedagogy team. Most of the children’s projects were about recycling, and by coincidence, they complement each other: one group dealt with the different types of garbage collectors like organic, glass, paper, metal and plastic that are needed at school, another group was about reusing materials.
An interesting day had come to an end. Apart from the experience and newly found knowledge, all participants were appointed as Climate Justice Ambassadors and received a certificate and a Plant-for-the-Planet T-shirt. Organizers and guests were very impressed by the performance of the children. Sometime later the children had the opportunity to take action for their future right away: They went to plant trees! Before the activity started, the representative of the Environment Secretariat, Leandro, explained how to plant and take care of trees. Every climate justice ambassadors had one seedling to plant. Some kids even started to collect trash after they were finished with planting. The children ensured that they will take care of and cultivate their seedlings.

This Academy was made possible due to the wonderful commitment of our supporters. Without their help, the Academy would not have been possible.