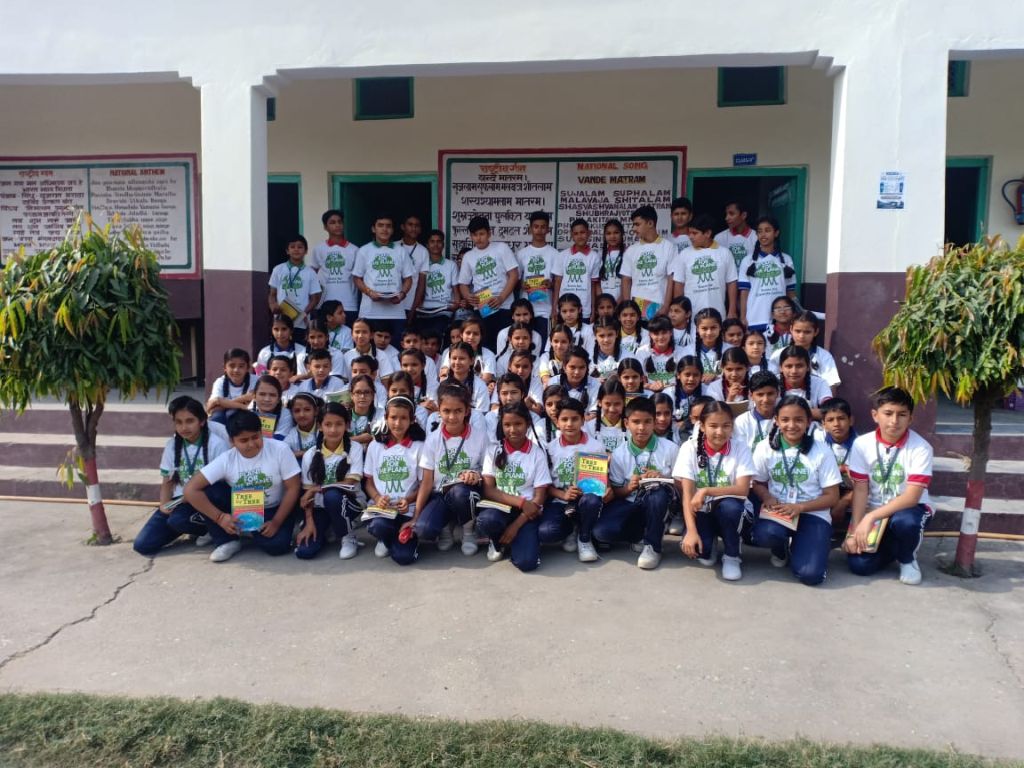 This Academy was attended by altogether 77 students from 08 schools. It took place in the M.D.M. Educational Academy, Tanakpur, India.

The Academy was made possible with the dedicative commitment of Plant-for-the-Planet Foundation, M.D.M. Educational Academy and members of YCSG, Harela and TGIC eco club. Special thanks goes to Plant-for-the-Planet Academy staff Adelya for helping us throughout the Academy.  We would also like to thank Mrs. Sunita, Mr. Dharmendra Chand and Mr. Ajay Pal for helping us contact all schools and for providing us venue and other basic facilities. Not to be forgotten are the many helpers and supporters, without whom the implementation of the Academy, venue, technology, Tree-planting event and much more would not have been possible.

After a brief welcome and registration process the full attention of the children turned to the presentation "Now we children save the world!" which was given by Plant-for-the-Planet Coordinator, Dharmendra Kapri.  The presentation covered topics like the introduction of Plant-for-the-Planet, sources of CO2, the greenhouse effect, global warming, photosynthesis,  climate change, climate crisis and climate justice . After the presentation, children had the opportunity to ask questions through an interactive question and answer session.

After a short break, the children were divided into 6 groups to learn about global distribution and justice in the World Game. The children distributed playing figures, candy and balloons on the world maps respective of the world’s population, wealth and CO2 emissions.  Each group had one Moderator from our Academy team to help them understand the rules and the process. The children were first asked to distribute the balloons, candy and tokens as per as their knowledge and later on corrected by the moderator wherever needed.

After that the kids formed 6 public speaking groups and prepared and presented short passages from the opening presentation that they had seen at the start of the day. They gave each other tips on how to improve their presentations in the future and a short session on how to give a good presentation was conducted by Miss Priyanka Chand and Mr. Harshdev Punera.

The students then broke for lunch and were able to relax a little and to discuss the topics covered so far with each other.

Rested, and feeling energized, the children relocated to the schoolyard to plant their own trees! Before the planting commenced, they listened intently to the advice of the Harela Eco club in charge Mr. Sandeep Chand. He explained how and when to plant trees, and also showed the children how to care for them to make sure they survive. In total they planted 12 trees in just 40 minutes.

After everyone had the opportunity to write down their thoughts to each question, their thoughts and future plans were presented in front of other students and teachers.

After the World Café the students were asked to give shortened version of morning presentations, their future plans and outcomes of the school groups and group discussions.

After a long, fruitful, and enjoyable day, all 77 participants received their certificates from Mr. Dharmendra Chand and Mr. Dharmendra Kapri, which recognized them as a Climate Justice Ambassadors.  An interesting day had come to an end. Apart from the experience and newly found knowledge, all new Ambassadors took a copy of Tree-by-Tree, and of course the Plant-for-the-Planet T-shirt with them.

The organizing team of Plant-for-the-Planet academy Tanakpur, India would like to thank all those involved for their help and support to make this academy possible.

All pictures taken on the Academy day can be downloaded here.

Sign up for one of our Academies to become a Climate Justice Ambassador yourself!