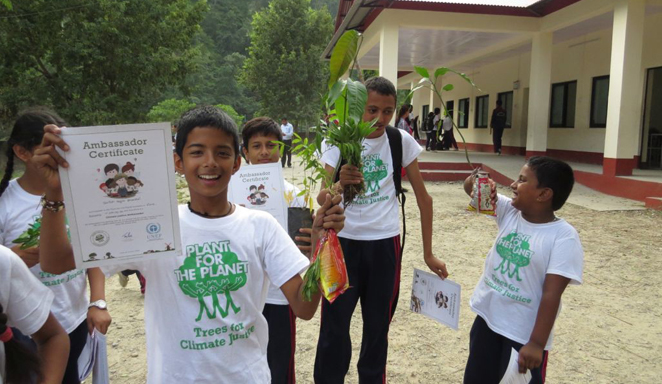 Altogether 75 children from 8 schools attended the Academy in Dolakha.

The program has started with the ice breaking session as the introductory part of the program where students got the chance to make introduction with all the participants.

After that, the session was handed over to Climate Justice Ambassadors; Sudeep Ghimire to give the presentation "Now we children save the world!".
The presentation covered topics as: sources of CO2, global warming, photosynthesis, the climate crisis, Plant-for-the-Planet and global justice. These topics were presented in a way suitable for children of the same age. In the subsequent question and answer session, the children had the opportunity to eliminate any ambiguities they may still have had.

The next step of Academy was the World Game. Kids were divided into three groups to learn about global distribution and justice in the World Game. They distributed playing figures, candy and balloons on the world maps laid out on the tables as symbols of the world’s population, wealth and CO2 emissions respectively. Eventually, the CO2 emissions and wealth were distributed fairly – everyone has equal rights. After the World Game, the students were taken to the canteen for the lunch where they also had the opportunity to interact with each other.

The next step in the program was the Public Speaking Training. The children were explained about the basic public performance tips. Then the students were given some slots from the opening presentation that they had seen at the start of the day and they tried to present it to the friends. They gave each other tips on how to improve their presentations in the future.

Afterwards students were divided into the school groups to make their specific action plans for each group. Similarly some of the students were divided to discuss upon the ideas of the topics of Word Café. They had a huge group discussion to finally came up with their plans.  After every schools made their plan; each school group presented their ideas to everyone in the hall.

After a long, eventful, and enjoyable day, all 75 participants received their certificates, which recognized them as a Climate Justice Ambassador.  An interesting day had come to an end. Apart from the experience and newly found knowledge, all new Ambassadors took with them a Certificate, Tree by Tree Book and of course the Plant-for-the-Planet T-shirt they collected at the start of the day. Teachers, Friends, organizers and guests were very impressed by the performance of the children. And the final part of Academy – planting party. The students were so much excited to plant trees. Students planted 8 trees around the School premises. Students of the host school made the commitment to protect those plants. The team at Plant-for-the-Planet would like to thank all those involved for this wonderful Academy Day. Special Thanks goes to host school for helping to make the successful academy.

The academy was made possible with the dedicative commitment of Khimti Project School. The event was free-of-charge for all the attending children. Special thanks goes to all the teachers and Management team of the school. Campaign Picture with the Principal of the School

You will find more photos in our Flickr Album.

Do you want to become a Climate Justice Ambassador too? Check out our list of upcoming Academies, maybe we are making one right in your city.